Last year I wrote Bootstrapping Caliburn.Micro with Autofac and it has since become one of my most popular posts. While the code presented in the post worked at that time, wizbit and Craigology pointed out that it stopped working with newer versions of Autofac. I set out to do the minimum amount of changes to make it work with the newest versions Autofac and Caliburn.Micro.

That was the plan. It has been said that no plan survives first contact with the enemy. Once again that saying is proved true. Both Caliburn.Micro and Autofac were now available as Nuget packages. Given my ongoing goal to try and favor Nuget dependencies, I used them. 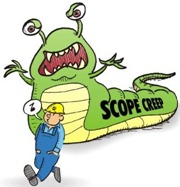 {:.float_right} That’s when I discovered Caliburn.Micro’s new default bootstrapper based on MEF. While I think this is a vast improvement over the original default, and I like the fact that it is included as part of Caliburn.Micro, it broke some of my default conventions. Specifically, I like to enforce a certain project structure when working with MVVM in which views are in a Views namespace, and ViewModels are in a ViewModels namespace. My Autofac bootstrapper enforced this.

This got me thinking that while it is my convention, it might not be for others. So, I made a few changes to my bootstrapper to make this convention an option with my setting as default (it is still opinionated code). That’s when I noticed a few other settings that other users of my bootstrapper might want. Can you smell the scope creep? By the time I was done with my changes, I had created four properties that can be changed, added a new override, and decided to make this a Nuget package of its own.

So before I go on to the new stuff, where are the changes I made? Specifically, the code in GetInstance() when I tried to resolve in Autofac by name. Both wizbit and Craigology suggested fixes, but I liked Craigology’s TryResolve fix, and updated the code accordingly. So thank you to both.

Four Ways To Modify My Opinion

or if you are more GUI minded, use the Add Package Reference dialog.

Getting the Code for Caliburn.Micro.Autofac

Configuring Your Code to use Caliburn.Micro.Autofac

Then compile and run.

So what are the key differences? The base class for the bootstrapper is the AutofacBootstrapper; the type parameter is ShellViewModel instead of IShell; and we overrode ConfigureBootstrapper to tweak the conventions to support the Caliburn.Micro default case.

While this little update turned out to be more significant than expected, it gave me the opportunity to not only update the bootstrapper for the current versions of Autofac and Caliburn.Micro, it gave me an excuse add a few nice-to-have features, and to turn this into a Nuget package.

If you have suggestions of new features, please comment below or add an issue to the issue tracker.